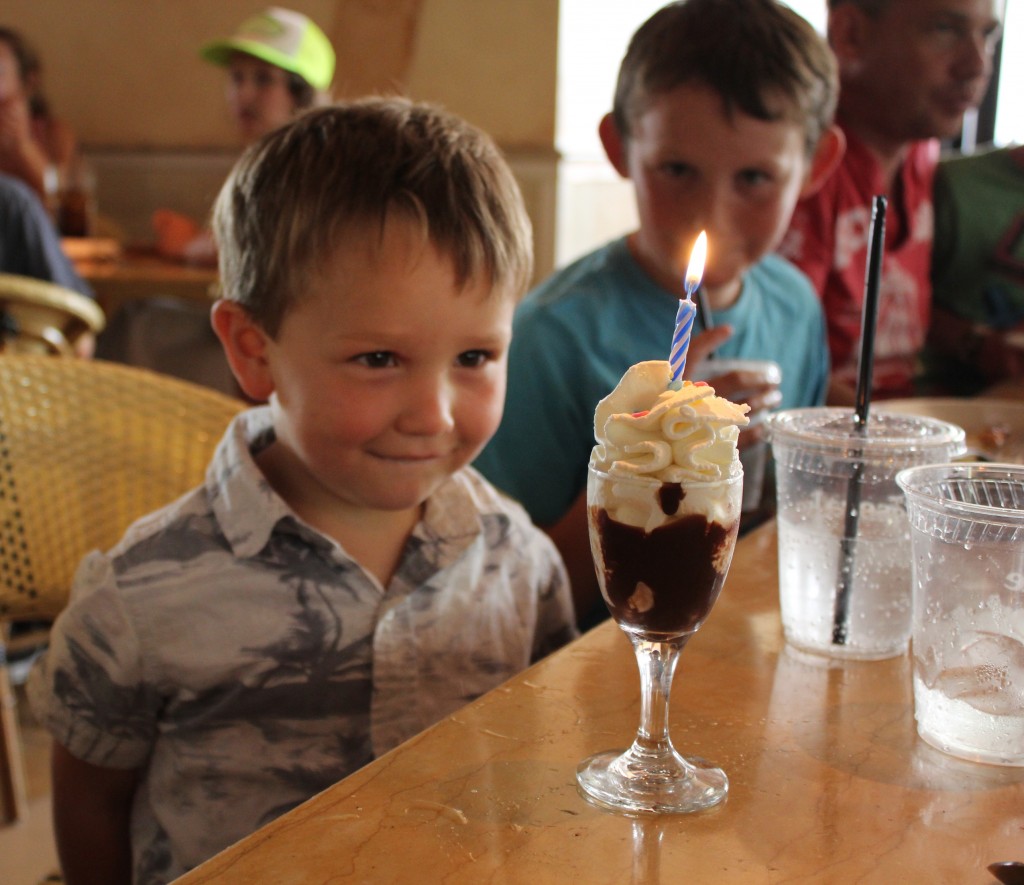 DAY 2 – So, so, so exhausted, but happy exhausted! Arrived at 6.25am (Honolulu time)[3.25am Melbourne time] after somewhat turbulent and not the comfiest seats to sleep in flight. One child succumbed to the turbulence! iPads we hired were well worth it at $15 each – kept everyone occupied, and the snacks we brought from home were plentiful and satisfying which saved us heaps of money! Flight staff were friendly but not overly attentive – other passengers were more helpful in our time of need searching frantically for one of those airline spew bags! Our carryon baggage was all good and also saved us lots of money. And the kids pillow pets came in VERY handy to make the flight more comfy!

Going through immigration was an experience. our fingerprints are now on record in the USA (well Ian’s, mine & Brittanys anyway). We hadn’t organised transfers from the airport ‘cos we thought we’d work it out. We did work it out and met the locals! An interesting bunch! Our trip in on TheBus was an experience with ‘all sorts’ of commuters on and off the bus for the hour long trip into Waikiki. I’m sure one guy was carrying a handgun – I didn’t look him in the eye. Too scared he would pull it on me and steal all my money and maybe even take a child for ransom (my imagination was running wild!). The tix only cost us $10 for all 8 of us so I guess it was worth it. We’re going to brave the bus again tomorrow….. Eek!

We’re lucky ‘cos we were so early to check in and The Royal Hawaiian, a Luxury Collection Resort they organised rooms for us as soon as we got there. VERY IMPRESSED and VERY grateful ‘cos we weren’t looking or smelling our best! After settling in and beautifying ourselves we were amongst the first in line to try out the famous The Cheesecake Factory! The ‘sodas’ were in massive glasses and lots of refills and the dishes were (as reported) a nice size and yummy! And ‘cos it’s Kobi’s birthday in the USA he got a free Sundae and the restaurant sang Happy Birthday to him. How cute. After lunch the kids & Ian had a swim at our hotel and the Sheraton Waikiki (very nice!) and I had an unintentional nap. We discovered the ABC shops (they are everywhere), had pizza for dinner and had a dip in the sea. The oceanfront from our hotel is perfect for the whole fam to swim ( I want to learn how to stand up paddle board!). That is all – now we are catching up on our sleep! Goodnight x

Quotes of the Day…

Me: I don’t really feel like I’m in a different country.
Brittany: No. Just everyone talks in a different accent, they are all wearing flowery shirts and people start hula dancing in the streets

Ian & kids in the outdoor spa
Ian: it’s started raining
Brittany: oh, is it? I thought everyone was just constantly splashing me!

Oh……and the bathroom taps are installed the opposite way to our taps! I thought I either had to grow more muscles to turn the bathroom tap on or it was faulty. Silly me!